skip to main | skip to sidebar

My Sweetie surprised me as I had forgotten that I had the below circled in one of the catalogs. Nice gift! 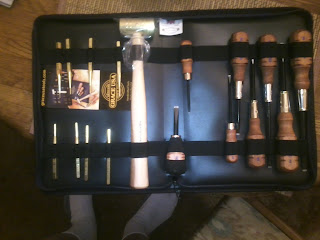 Almost made me want to take something apart and put it together last night just so that I could play with the tools.
Posted by Primeval Papa at 12:30 PM No comments: 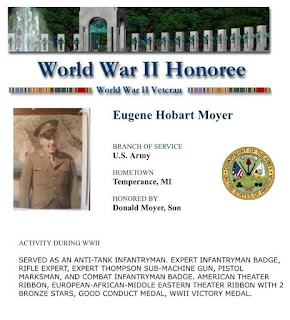 Posted by Primeval Papa at 3:36 PM No comments:

Getting Ready for the Zombie Apocalypse 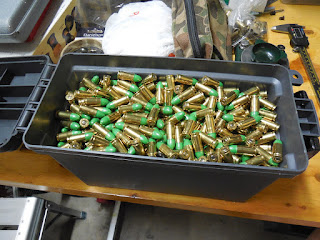 Just kidding as I am actually getting ready for some steel shoots. I was doing inventory and relocated these older polymer coated bullets from Lucky 13 so I loaded them up. This company seems to have folded. The green color on these was called Zombie 13. I had loaded a few for a test batch some time ago and they shot well.

I am having poor luck with companies. Lucky 13 is gone. I have purchased bullets from Eggleston as they had good prices and polymer coats in different colors. They are now transitioning to new ownership and no orders are being taken until the transfer is completed. We shall see what their prices look like when they come back online for sales.

It is time to get back to some blogging and some steel shoots!
Posted by Primeval Papa at 6:30 AM No comments:

Glow in the Dark Wild Boar!!??

Wild boars roam Czech forests - and some of them are radioactive

Hunting radioactive boar at night could be an alternative to wild boar hunting in Texas! Some of the boar have been eating a seasonal false truffles which have an affinity for Caesium 137 which is what was released in copious quantities at Chernobyl.
From the article ....
"The semi-good news is that even meat from radioactive animals would be a health hazard only in large doses, Drapal said. You would have to eat it several times a week for couple of months, to get sick, he said."

I can hear the conversation in the night time hunting blind now, "OK Comrade, don't shoot the glowing one in that pack. It probably has too high a level of nuclear energy to use the meat. The others you can take because you can eat a little bit of them."

I will have to get my thoughts around that statement. Let's see, the half life of Caesium 137 is 30 years. You have taken it into the system by ingesting it. The race is on! How long does it take the body to purge all of it out of the system before you have that next pulled pork sandwich? I guess you could add a little Prussian Blue to the diet which could it get it out of the system a bit quicker but I think I may just pass.

Posted by Primeval Papa at 7:30 PM No comments:

We went fishing at the Aaron Lodge #49 Masonic Family Picnic that was held at Christopher Columbus Park. A fine time was had by all and there was a nice turnout. Don't laugh at my little fish as I believe that it was the only one of the day! 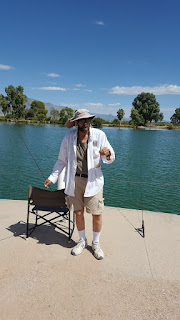 There may a trend developing here in that I must take a picture of every teeny fish I catch when going out. I am sure that I will do the same if anything notable (in a larger sense) is caught.
I am having fun with the teeny fish pictures.

UPDATE: I needed to update this post with a picture from the 2019 picnic. I am becoming more proficient at catching very little fish! 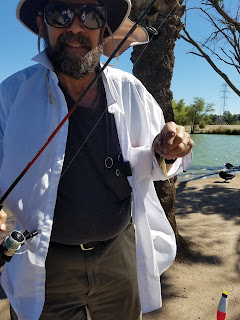 Posted by Primeval Papa at 5:01 PM No comments:

Back to Chicago - Part II

Once again I found myself outside the windy city in the hamlet known as Kingery on the 15th to visit with daughter #1 (D#1) and fiance (F). The F and I went to Bass Pro on Friday to talk to the guys in the fishing department about where to go and to buy 3 rods/reels along with the appropriate tackle box and terminal tackle. Yes, there were a few lures thrown in there along with a book on fishing in Illinois. F spent the usual amount of time, for a first time visitor, admiring the myriad of mounts and displays. I remember the first time I went into a Cabelas/Bass Pro and how impressive it is. We had lunch at the Islamorada Fish Company and headed back to the homestead to prepare for Saturday.

Saturday found F and me at Heinecke Lake for our first stop. This is a man-made elevated lake that serves as cooling water for a power plant. There is a lot of rip-rap posing as a shoreline. The guys there were mainly fishing for catfish although there are bass, sunfish, and some walleye. We were a bit late in the day for Walleye fishing but did not care as this was an exploratory trip. We wet a line and proceeded to hook up on the rocks with a few hooks being lost. A few nibbles were encountered without any serious strikes.

After Heinecke, we went to check out Whalen Lake which is closer to the homestead. This is pleasant little lake in one of the many preserve areas of Illinois. Again we wet a line and proceeded to start playing with bluegills. I had a great time roaming around with F.

Sunday was a stand-down day. We got a paper in the AM, ate breakfast, looked at the paper and then returned to Bass Pro to get D#1 a fishing license. We picked up a few things that I thought would be handy for the next day fishing. Later, we went for a walk to the little waterfall in Waterfall Glen Preserve. No, it not named that because of the waterfall. It is actually named after Seymour Waterfall who was an early president of the Districts Board of Commissioners. The waterfall is man made. Zoey, the guard dog, went with us to keep us safe. She was hilarious as when D#1 was going to set her down in the water, the feet were going like she was swimming before touching the water.

We were off to Whalen Lake on Monday morning for all of us to play around. No one caught any large fish but due to my extreme expertise  and endless patience, I was able to catch the smallest bluegill and this very small gobie pictured below. 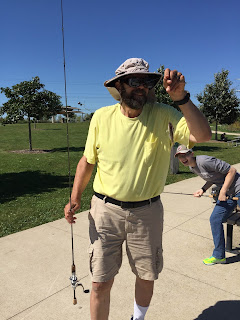 There really is a fish in this picture! Note the amazement on D#1's face that I was able to accomplish this almost impossible task. I am proud to have my picture taken with this elusive hermit of the lake.

The 18th was D#1's birthday and the 20th was mine. We split the date difference and went to Cooper's Hawk that evening. Cooper's is a winery and restaurant. It was excellent. Good wine, food and company. There is not much more for one to ask for!

On Tuesday D#1 and I returned to Whalen to play around with some more fish. My last day there went too quickly as always.

I was off to the airport Wednesday morning to wait out a thunderstorm to catch my flight. I thank D#1 and F for the hospitality and putting up with the "old man". I believe that I will switch modes and start fishing for the largest fish on the next trip!
Posted by Primeval Papa at 7:34 PM No comments:

It has been almost 2 years! This program was started 9/24/2014. I have been on maintenance for about six months. Maintenance means that you basically stay on the diet with a slight increase of the regular diet food. You may also break the diet once or twice a week. So you can have anything you want for dinner on this break but you are not to skip any of your regular meals coming up to that dinner. I say once or twice a week as you will need to see what works for you in keeping the weight you want. For me it is once a week I can have a dinner of my choice. The diet has become second nature so I am quite comfortable with it.

My Sunday morning walks have continued along with my PT exercises and other work outs.
The walk keeps getting longer and have grown into a 10k event. I have gone further but there is not much need for that. It is my time for the 10k that I am working on to decrease. Best time so far is 1 hr 50 min. No running is to be done by me due to the lack of cartilage in the knees and the lower back damage.

I had lost 135 pounds on the diet but I am now 130 pounds down as I am intentionally building back up some selected muscle groups. I am a little heavier than my lowest weight but actually look trimmer due to exercise. I started at 372 pounds and weighed 239 this morning. The weight floats around the 240 mark. I feel good and have plenty of energy.

I cannot say enough good things about the Diet of Hope and the people who work there. I do not go to the office anymore and have not for some time as there is no medical necessity. I am going to visit just to say hi. Thank you Diet of Hope!